Service Standards: The challenge of making them human

The Customer Service team at Olark recently published our first set of service standards, and we’re pretty excited about it!

We would love it if you wanted to create your own standards too. You do? Awesome! As it happens, we made notes as we went along. Hope they help!

What do we mean by “Service Standards”?

We define our service standards as a set of values which inform how we provide customer service. There are lots of ways to approach a set of standards — a more legal approach similar to a Terms of Service, a data heavy approach with quantitative evidence, and many more.

When deciding on a set of standards, it's important to check out what other people in your industry are doing too, as that helps inform your choices — either to keep a broadly similar approach, or to go off piste. Our friends at Groove outlined a comprehensive set of customer service metrics that SaaS companies use to benchmark and measure team performance. We also liked this approach by our friends at Basecamp who publicly share their average response time to customer inquiries.

Ultimately, you'll need to craft customer service standards that work best for your team and your organization. As we’ll explain later on, our service team chose not to rely too heavily on data and figures.

Before we tackle what we did, let's explore the questions, “Why did we want a set of service standards? And why should you consider doing the same?"

For us, the answers were:

We are in the business of making chat human, and that is how we chose to frame our standards:

As customers, we want quick, friendly, helpful service that leaves us feeling warm and fuzzy. We want to feel a human connection, we want to feel like we interacted with a person who cared...We want to treat you like we want to be treated. It’s only human.

When I first ran the idea of service standards past the team, one things stood out to me: some people wanted clarification about how these standards would be used internally.

One concern was that people would be held to them in such a way as to affect their evaluations. In essence, that there was a risk they might be clobbered over the head with the standards if they failed to live up to them.

That is not how we operate as a company, but it was important for us to recognise that that was a genuine concern, and that people in the team might well have experienced that kind of thing in previous positions.

We did two things to alleviate that concern. Firstly, as Director, I made a personal assurance that the standards were there to give us a framework to work from, not as an addition to any evaluation process. They are something to learn from and iterate on. They are not a stick to beat anyone with.

Secondly, we decided as a team that we would instead use the standards to give us a framework to build our internal feedback process against.

Now, when we review a case as a team and feel the interaction falls short of our standards, we ask ourselves what we could have done better. 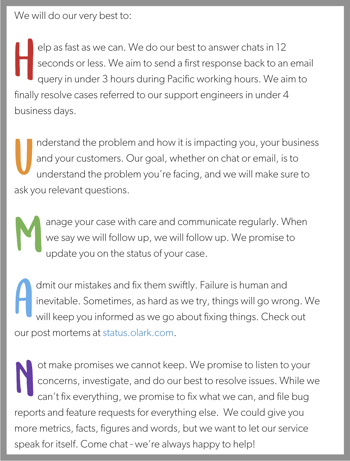 There is no doubting the fact that it's risky to share the standards you hold yourself to with the world.

The biggest risk to consider is that you are setting yourself up for a fall. If you don’t measure up to your own standards, people will soon tell you about it. They may also tell all their friends on Facebook, Twitter, Instagram or other networks.

One of the ways we considered that risk, was to reframe it as an opportunity to grow. One of our 5 standards reads:

[we will do our best to] Admit our mistakes and fix them swiftly. Failure is human and inevitable. Sometimes, as hard as we try, things will go wrong. We will keep you informed as we go about fixing things.

Acknowledge front and center that you are not perfect. No-one is. One of the best ways to build trust in any relationship is to admit when things go wrong, and to do your best to make it right. As a Service Team, we believe that it costs very little to tell a customer that we got it wrong, and it often pays dividends.

To be able to tell people what they can expect, you need to know what you are currently achieving. This is where metrics come in.

As a Service Team we track a whole range of things:

To do this, we rely on Olark’s own reporting, Help Scout reporting and data from our own services, all of which we import into Looker in order to get a bird’s eye view of how our Service is doing.

It is awesome that we have all the metrics above, and it is testament to the hard work of our amazing Olark Data Guru, Ben Schultz, that they are not only available, but also digestible.

However, there are a lot of metrics, many data points and even more graphs. Some people love it. Others find data in that format frankly terrifying.

We started by writing out the baselines for our metrics, as a first draft of our standards. It was dry. It didn’t feel human, and it didn’t reflect our team or the Olark values. As a team and as a company we want to be human.

That left a question hanging in the air: How do we make the numbers human?

Our answer was to take the baselines we knew we had, and find ways to express them which didn’t rely on numbers.

Sure, we do include our times for first resolution, and our CSAT score for the past year, but beyond that, we have tried to describe the how and why of the things we do do things, rather than present you with a page full of graphs.

To raise a smile, we arranged our five standards to spell the word “human."

So, you know why you are writing standards, and what they are not for, you have your baselines, and you have found a format you like. What’s next?

If you can, run them past some customers to see what they think. After all, they are the ones who will know if you are barking up the right tree.

We would highly recommend running the standards past your whole team - not just your Service team, but everyone. The feedback you get from people outside your particular team can often be invaluable - they can generally see the wood from the trees as a result of not staring at the document for days on end.

At Olark, running the standards past the whole team was doubly important, because we practice All Hands Support, so in the course of a month, most of the company will interact with a customer who has a question or a problem, meaning everyone needs to buy in to the standards.

Once your team or company has ratified the standards, take the plunge and publish them.

Remember how we said above that nobody's perfect? That applies to your standards too. As soon as they are published, you may realise that you need to tweak them. That’s ok.

One of the first thing we planned after publishing the standards, was to iterate on them.

We are going to take a deep breath and send them to customers who have interacted with our service team fairly regularly in the last few months.

We are going to specifically ask if they would agree with the standards to set ourselves, and whether we are living up to them.

If we are not living up to them, we’re going to take it as a learning opportunity and figure out as a team how to improve our workflow.

Just like your service team, and your customers, your service standards should be seen as a living, breathing creation. Something which evolves and develops over time, which is never perfect but which like all of us, tries its best to get things right as often as it can.

Does your company publish its Customer Service Standards? Share them here - or email support@olark.com - and we'll add them to this article! 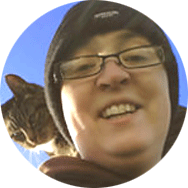 Rhoda Meek is Director of Customer Service, aka Customer Service Warrior, at Olark. Rhoda lives in Tiree, Scotland, and when she's not helping customers, you can find her fishing and growing vegetables in her backyard.